Fishing for a Future

There are so many things I love about Belize. The wide-ranging shades and depths of blue; the sunrise on an open horizon of the sea; the ingredients and food; but what secures Belize firmly in my heart are the people. They are – as many people in the world are who are left to make good with the resources at hand – so ingeniously industrious and creative in finding solutions.

Every day we spend on Ambergris Caye, we learn something new from our neighbors. And in doing so we learn more about them and how they came to be where they are in life. My partner Danny is constantly impressed by the construction our neighbor and friend Marvin completes with his crew –  the tools they create, their way of working without so many of the things we take for granted.

I am always meeting someone on the island with a great story to tell, an obstacle overcome, or a seemingly impossible journey to their present circumstance. And this particular day was no exception, as I scoured the island to find where to get fresh fish and lobster (there are no fresh fish markets since most people fish for themselves), I met a family of fishermen coming in from an afternoon of lobster fishing.

Coming in from a harvest. 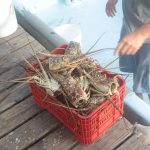 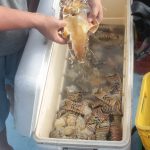 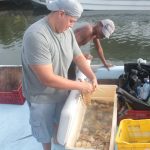 Lucia and crew getting unloading for the day.

The small white fishing boat was packed with five men, sandwiched between coolers and buckets. As they headed toward the docks, the crew was breaking off the tails and tossing the bodies in another bucket. Everything is sold separately, unless you special order the whole lobsters. I followed the crew down a road into a little alley where they began weighing out lobsters to run to the area restaurants and to hand out to the few lucky patrons like me who figure out where to find them.

I began chatting up Lucia Nunez on the dock as I waited for the captain to step off the boat. What began as a social hello, became a discussion of family, history, and growth as most of my conversations on the island turn.

The Nunez family has fished for generations, Lucia explained. His brother David is the captain now, Lucia was home for a break from medical school in Cuba. 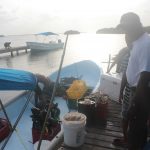 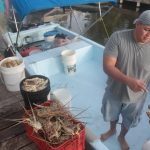 “My father and grandfather were fishermen. We are a family of fishermen. But I decided to go to medical school through a special program with the government.  I am the first in my family,” Lucia began. “I am on my last year and then I will return home and work in the public system for 7 years before I can go into private practice.”

Belize has a shortage of doctors, their agreement with Cuba, medical students and practitioners provide for Cuban doctors to come to Belize and provide services. In exchange, Belizean students go to Cuba and work in their medical facilities.

While the practice has been argued against in the political arena in the U.S. and Brazil, the agreement for the tiny country of Belize with its approximately 380,000 residents nationwide is essential in both the short and long-term.

“From the first day, you get hands-on training,” Lucia said. “Other schools I would not get the practicals right from the start. It can be hard in Cuba, but we are like a small family at school.”

I asked him what made him decide to become a doctor and break from his family’s tradition.

“Everyone is getting older and they need someone to take care of them,” he said simply.

Those matter-of-fact answers are what I love about the Belizean soul. Solutions are simply what they are, the next right step. No quick fixes, no excuses, simply solutions with a positive and grateful heart. 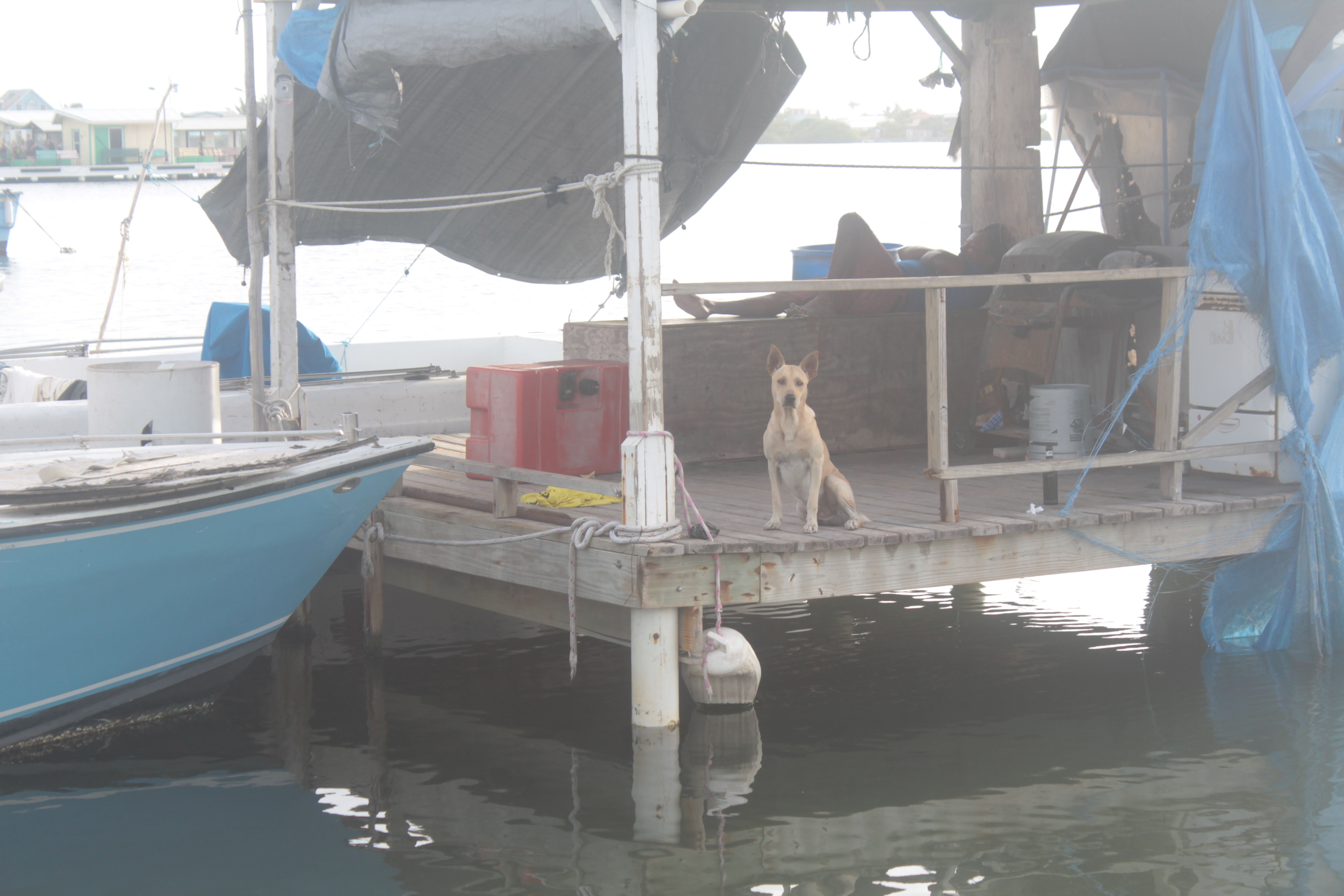 The Central American country of Belize is nestled between Honduras, Mexico, and Guatemala with Caribbean Sea shorelines to the east and dense jungle to the west. Offshore, the massive Belize Barrier Reef, dotted with hundreds of low-lying islands called cayes, hosts rich marine life. Belize’s jungle areas are home to Mayan ruins like Caracol, renowned for its towering pyramid; lagoon-side Lamanai; and Altun Ha, just outside Belize City.

Join us this December to discover your Belize experience. Lit’l Pond Adventures is hosting a culinary-adventure package to Ambergris Caye the first week of December. The all-inclusive package is $2,880 per couple including in-country transport to Ambergris, meals, activities, and cooking demonstrations. For more information, email michelle@litlpond.com .